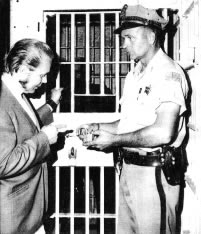 Tucson Arizona Municipal Jail
In 1963, I was stationed at the Davis-Monthan Airforce Base, which was a Strategic Air Command Base in Tucson Arizona. In my off duty hours, I enjoyed performing my comedy magic act throughout the area. I had recently been hired by the Catholic Church in Tucson to present a show on Halloween Night. I was hoping to drum up a little publicity for the show when something unique fell right into my lap.
The Municipal Jail of Tucson was getting ready for a big state inspection. They needed volunteers to help get the jail in shape and often solicited volunteers from the Airforce. Yours truly quickly signed up to be on the clean up crew. You couldn't have paid for a better opportunity to examine a jail. I spent two weeks working in this place, cleaning and experimenting with a way to escape from the jail. The time arrived when I knew exactly what I was going to do to escape from this jail.
I went to the authorities and challenged them! I told them, I would escape from any cell and from any handcuff they had in less than ten minutes. They were reluctant, but later agreed with the condition that I was not allowed to contact the press. Afterall, they were gearing up for a state inspection. The last thing they needed was a front page article describing how someone had just escaped from their jail. I asked them if I could at least have a testimonial on their letterhead which stated that I escaped and they agreed.
At 4p.m. on October 30, 1963, I was escorted into the Municipal Jail in Tucson Arizona. A committee, made up of the Chief of Police, the Head Jailer and several guards, were waiting for me. To say they searched me is an understatement. They really searched me! They didn't do a cavity search, but it was awfully close. Once they were certain I had no tools on me, they handcuffed my hands to the bars of the jail cell door. My feet were also leg ironed to the bars as well. I had two doors to get through after releasing myself from the cuffs.
Back in those days, dress shirts often came with collar stays. Typically they were made out of either plastic, or in the case of the U.S. Military, they were made of metal. Oddly enough, they also made a perfect shimming device to enable me to get out of the cuffs. I secured the shim from my collar and got my left hand free and then my right, followed by the leg irons. Now it was time to tackle the door. I'll not reveal my method, suffice to say it worked perfectly and I was free of the cell. Next I had to tackle another door.
Unknown to me, there were two guards standing on each side of the door. They were hoping to catch me. I couldn't see them. But they couldn't see me either. I had a hunch that someone may have been trying to spy on me, so I took the shim and rubbed it back and forth on the cell door making a metallic scraping sound. No one came out so I opened the cell door. The moment I stepped through they both jumped out at me. They didn't jump out though in anger or anything of the kind. They were excited and dumbfounded that I just escaped. One of the guards said, "I don't know how in the world you did that! We searched you from head to toe. We 'heard' you working on the door. You don't have to tell us how you did it, but we sure would like to know!"
True to my word, I didn't contact the press. And true to their word, they did send me the testimonial letter, signed by the Chief of Police, the Head Jailer and all the guards who were present during the escape.
A side note to the jail escape. Because of the gossip that spread through police circles, I was regularly hired to entertain for police functions in the area. Throughout my career, I always had great repore with law enforcement officers.
Posted by Steve Baker at 9:38 AM