The Man Who Became Mr. Escape.
by Nick Lewin

Back in the late seventies I made a fateful trip Calgary in Canada to film a television show. Along with me on the trip were two men who became very good friends. The pair of wizards whom I met for the first time in Calgary's frosty environment were Piet Paulo and Steve Baker.
While Piet and I have remained close friends to this day I lost track of Steve sometime in the early nineties. It was with delight that I read in Magic New Zealand recently that Steve 'Mr. Escape' Baker was coming out of retirement at a future event.

Less than a week later I watched an episode of Criss Angel's Mindfreak and there was Baker in person watching as Criss attempted one of Steve's signature escapes. Angel had been inspired by 'Mr. Escape' in the eighties and paid tribute in the perfect way, by risking his life in a truly death defying stunt. It was great seeing Steve again and watching as his influence was acknowledged by the always-generous 'Mindfreaker' himself.
When I first met Steve he wasn't yet 'Mr. Escape' and escapology was just one element of his magical repertoire and audiences had a chance to enjoy his superb comedy magic and other skills. The first time I saw Steve escape from anything tougher than the Calgary cold was in Hollywood. I received a call from Steve who asked if I would assist him while he performed a challenge escape at an event that celebrated Billy Eckstein's star being added to the Hollywood Sidewalk of Fame. Steve had the tough job in
actually having to make the escape while all I had to do was work the microphone, describe what was going on and build theexcitement, What I hadn't expected was that I would be working that microphone for nearly an hour. When Steve worked a crowd
over he took no prisoners and the audience was on the edge of their seats right up until the standing ovation that greeted his eventual escape. A lesser performer might have made their escape faster but not Steve, who is a showman through and through. As
for me, I have never been short of words and I enjoyed every minute of it.
A warm friendship quickly developed between Steve and me; we lived in the San Fernando Valley and together with our wives Susan and Julie we shared the up's and down's of our careers. I guess the downside was the fact that we had very little spare
cash but that didn't stop us from having fun. We knew every good happy hour in the Valley and where the best free appetizers were! I remember once leaving for a cruise gig and I had so little money I really didn't know how we could make it until payday.
Steve drove with us to the Port of San Pedro to wish us 'Bon Voyage' but it wasn't until later that night I realized that Steve had secretly tucked a fifty-dollar bill into my pocket. It
was a lifesaver! A typically generous act executed in a manner that didn't even allow room for thanks and believe me fifty bucks was a small fortune to us in those days.
I watched with fascination (and certain misgivings) as Steve became 'Mr. Escape' and faced ever escalating dangers in the escapes he performed live and on a series of television specials.
When I saw Steve again on 'Mindfreak' a ton of memories flooded back and I was very delighted that Criss took the time and trouble to reintroduce 'Mr. Escape' to the public. If someone out there can let me know Steve's current whereabouts maybe we can
get together again and find a 'two for one 'Margaritas' somewhere and catch up with each other. 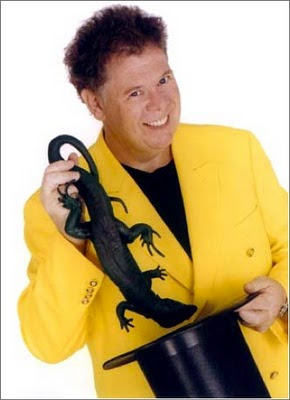 To find out more about the author visit www.nicklewin.com