The Coffin of Death 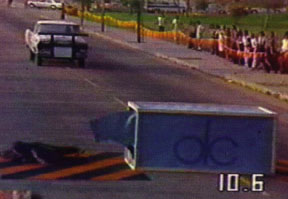 History of the Coffin of Death
Friday the Thirteenth conjures up all sorts of images in ones mind. Bad luck and superstitions are the cornerstones of the day. What better time to present the "Thrill Show & Destruction Derby" at the Houston Astrodome? On January 13-14, 1978 that is exactly what took place. On the bill, was a performer who had appeared on TV numerous times and was building his reputation as the most exciting escape artist around, Steve Baker.
Steve was going to attempt to break the world record for the fastest hanging straight jacket escape, previously set by Jimmy Dixon. For this stunt, Baker would hang twenty-two stories above the audience. It would take more than seven minutes just to raise him to the starting position. As was his custom, Steve held a handkerchief firmly in his mouth, which he dropped the moment his escape attempt began.

Imagine that, hanging upside down, by your ankles, tightly strapped in a straight jacket , as it takes seven full minutes to get you to the proper height before you can even start the escape. On this Friday the thirteenth, forty seven thousand people were in attendance at the Astrodome. That was more than double the amount that witnessed Steve Baker escape from a straightjacket in Oakland at the Tribune Tower Building eleven years earlier.
Steve gave the starting signal by dropping the handkerchief in his mouth. Immediately, his body began to thrash and jerk in mid-air. The audience below him eagerly watched as the seconds ticked by. Steve Baker really milked his performance. Forty Four seconds later he was free of the jacket and the audience cheered in approval.
A trademark move that Steve created for his hanging straightjacket escape, is to reach up to untie his feet, turn himself around vertically in mid-air and place his foot in the loop he was hung with so that as he is lowered he can wave to the crowd below him. This is exactly what he set out to do when his hand slipped on the rope and Steve fell twenty feet backwards. An audible gasp by forty seven thousand people sucked the air out of the Houston Astrodome. But before he became roadkill on the floor of the Astrodome, he caught himself with one hand. He hung by one hand for seven long minutes as they lowered him to the ground. You could hear a pin drop. Not one person spoke a word as Steve descended. The moment he touched down, the audience went wild!
Steve did not break the world record that night, nor was it his intention. His plan was to create such a sensation with the hanging escape that people would come back on Saturday, and then he would attempt to break the world speed record for escaping from a hanging straight jacket.
Steve had thrown his shoulder out of joint and headed to the hospital after acknowledging the wonderful applause from the enormous crowd. The healthcare professionals in Houston tended to Steve's dislocated shoulder. They taped up his shoulder and his wrist that was badly chaffed by the rope he had been hanging from for so long. Once he was all taped up, he was released. As Steve was exiting the hospital, Chuck Strange one of the Thrill Shows Stunt Drivers was coming in. Chuck it seems had almost been killed trying to make a very dangerous car jump.
When Baker got back to the Astrodome he spoke with the events coordinators and offered to fill in for Chuck. He wanted whatever money they were going to pay him to go to Chuck Strange's medical bills. It turned out the Chuck had no medical insurance. The event producers accepted Steve's offer and he immediately went into action to create a new stunt for the January 14th show.
In his notes, Steve Baker had drawn out an idea that revolved around being handcuffed and locked into a packing case. Off in the distance a vintage Cadillac would come barreling towards the packing case and Steve would have only a matter of seconds by which to free himself before getting smashed to smithereens. This is the stunt he decided to do the next day and construction of the packing case began.
While Baker was in preparation for the new stunt, word got around about the jump accident the night before and the willingness of Steve Baker to fill in and donate the money to help the injured stunt driver. The media swarmed all over Steve and that night they completely sold out the Astrodome to standing room only. Fifty five thousand people came out to watch the show.
The debut performance of the 'Coffin of Death' was at hand. Steve had rehearsed the new stunt with one of the show's drivers during the day. He told the driver, "no matter what you think, you drive towards the packing case as fast as you can. DON'T slow down, no matter what."
Steve Baker, also known as Mr. Escape was now handcuffed and nailed into this rectangular wooden packing crate. Chains and locks were wrapped around the crate as well. A cover made up of a wooden framework and paper was placed over the crate. Off in the distance the driver in the Cadillac sat patiently awaiting the signal. A checkered flag was waved and the driver punched the accelerator. The car sped towards the packing box containing Mr. Escape. Steve burst out from the paper cover and got about ten feet away from the box before the Cadillac smashed everything to bits. An exciting escape and the audience loved it. But that was only the start of things.
Now it was time for the finale, the attempt to break the world's record by being the fastest person to escape from a straightjacket while suspended in the air. Steve was more than ready. The straightjacket was a borrowed Posey jacket and put on by two of Houston's police officials. Like the night before, it took 7 minutes to raise Steve into position.
Once Steve was in position, he mentally prepared himself. A moment later the scarf dropped from his mouth and with blinding speed he gave that jacket the fight of its life. BAAM! Sixteen point two seconds later he was free. January 14th 1978, he beat Jimmy Dixon's record of 19.9 by several seconds. Sadly the Guinness Record people wouldn't allow the record on a technicality.
It should be noted that Guinness didn't recognize his Tribune Tower Escape either. On that day he did set the real record for fastest escape from a borrowed straight jacket while suspended, his time that day in 1967, six seconds*!

Yeah, so that's the official story. But let me tell you something you might not have gathered from reading that. First, I started building the coffin/ crate on January 13th and it took me all night long. I had about an hours sleep before I had to perform. Also, I was not happy with the escape at all. I told the driver to not slow down, no matter what, and you know what? He SLOWED DOWN. He told me because he couldn't see me; he let off the gas a little. I wanted to jump free from the crate not 8 seconds before impact, but only a fraction of a second before impact. In my mind, the stunt just didn't go right. But hey, that was only the first time.
A couple months later, the Coffin of Death made its network television appearance on the Dick Clark Live TV show. All of my stunt drivers were out on a movie, so I hired Geoffrey Brown, a well-known stunt man in Hollywood to be my stunt driver. If you saw the footage from my DVD you know how that stunt played. Again, the driver didn't hit the packing case with the kind of speed I wanted, so it appeared I jumped a few seconds early.
Funny side note on the Dick Clark performance. Geoffrey Brown had rented that truck and mounted the battering ram to the front of it just before the show. The impact of hitting the crate smashed in the whole front of the truck, and Geoffrey removed the battering ram and returned the rented truck without mentioning the damage!
The third time I presented the Coffin of Death would be on TV's Games People Play and this time I pulled out all the stops. I added explosives and made the box look like a coffin. That version played exactly as planned and after that time I was fortunate enough to present the Coffin of Death another twenty five times. The most spectacular version was presented at dusk in Japan for a TV special.
STEVE